I went to the Ottawa Police Service Board meeting and you will never guess what happened…. 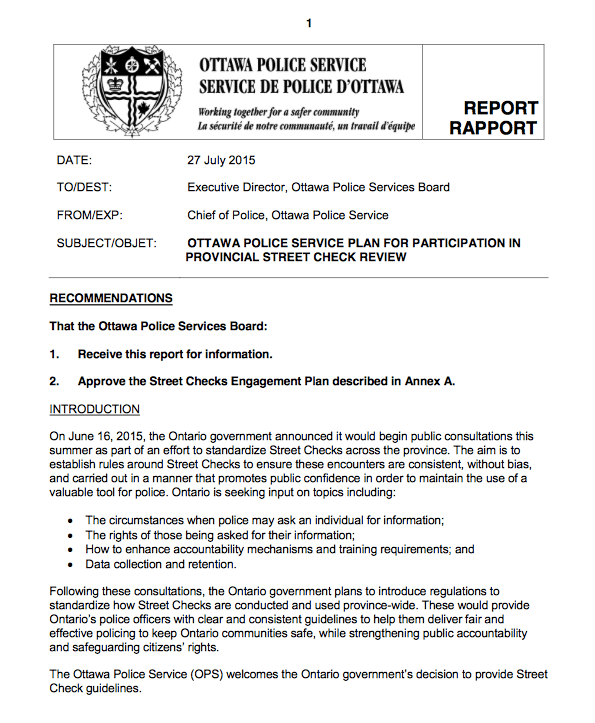 The Ottawa Police Services Board (OPSB) met today – I decided to go.  On the agenda was the Ottawa Police Report in to the controversial practice of police ‘street checks’ – also known as ‘carding’. A practice that Toronto Mayor John Tory has called “illegitimate” and “disrespectful”. So, I was expecting some hard questions.

But first a primer on carding.

Carding – questioning individuals to collect personal information in the absence of any link to a criminal offence – is by its definition an arbitrary exercise of police power. The information seized – names, address, associations, and well.. answers to any questions asked by the officer – are collected, recorded, cross referenced, and stored – indefinitely.

Although the Ontario Court of Appeal has held that this type of questioning constitutes a police search, there are no rules about under what circumstances the police can use, disclose, or share the information collected.

There are, however, reports that disclosure of non-criminal police contact has ruined lives.

Despite the fact that individuals have no obligation to talk to the police during a ‘street check’, the Ottawa police are dead set against any suggestion that they should inform individuals about their fundamental constitutional right.

Exploiting ignorance breeds mistrust and can be counter productive to community safety. But this is just the tip of the iceberg.  Carding data from across the province has shown that a disproportionate number of racial minorities – who have not committed any criminal offence – are being stopped and questioned by the police.

Take a minute and read the powerful article by Desmond Cole about his experiences being stopped and questioned by the police for no reason at all and tell me you don’t feel deep sense of disgust.

Cole was asked by the Toronto Sun if carding harms citizens, his answer:

“Untold thousands of innocent people have their names and info put a carding database. Even though carding documents non-criminal interactions, the info police collect sometimes shows up on a criminal background checks for a job or school placement. It can literally ruin someone’s future. People who exercise their legal right not to talk to police, like Mutaz Elmardy, or the four black boys detained by police on Neptune Dr., have been beaten up by police. Black residents, who get carded far more than anyone else, are stigmatized, and once you’re in the system the police can justify carding you repeatedly.”

Todays report should not be any surprise – things are no different in Ottawa.

In other words visible minorities are over represented in Ottawa carding incidents and perhaps even being systemically targeted.

This is why I thought attending todays OPSB meeting was important.

This is the context in which Ottawa police inspector Mark Patterson addressed the OPSB. Calling it an address is actually a bit of an overstatement. Patterson, who has publicly lauded the practice of carding, merely summarized the report – adding nothing new.

Not a single question from the board on street checks #ottnews

My colleague Leo Russomanno, who has written and comment on carding, next addressed the board and delivered a powerful critique of the practice (it was reported on by the Citizen and Metro News).

It should be concerning to community that black/middle eastern people are being stopped greater than share of population, he says #ottnews

Board should be asking for legal opinion on legality of street checks, Russomanno says #ottnews

But the OPSB did not have any questions for Russomanno either.

Maybe there is more, I though?

Without asking a single question the board voted unanimously to accept the report and approved the police plan to ‘review’ their practice of ‘street checks’ – a practice that the police themselves have defenced.

It is bad enough that the police are conducting a non-arms length reviewing their policy; but the problem is compounded  by the board’s complete silence.

Police services boards are independent bodies that should serve to represent the interest of the community and yet not a single question was asked about report into a police practice that has attracted so much criticism.

Maybe I was expecting too much.

So here are 10 questions I would have asked the police:

Your report says that there were consultations with “members of the public, academics, community organizations, and other stakeholders.” Did you consult with any lawyers, civil liberties groups, or maybe anyone who has actually been carded? Maybe you called Mr. Cole?Exactly who was consulted in the preparation of the report?Did you seek any legal opinions?Your report contains racial data.  The report also indicates that that data is only being released because there had been inquires made by the media. When was the decision made to release the data?Your report indicates that in 2014 there were 4,405 carding incidents.  The Ottawa citizen reported that they obtained data though access to information requests showing “that 675 different officers catalogued the behaviours of 6,331 unique people, although many were checked more than once, resulting in 9,620 entries into the police database for the year.” Can you explain this discrepancy?What is you explanation for the disproportionate representation of minorities in the street check data?Mr. Patterson, you have said that “There’s a huge difference between racial profiling and criminal profiling.” Can you explain the difference between these and how that would lead to disproportionate carding of minorities?You said that the Ottawa police need to do a better job of public education, why do you insist that persons being carded should not be informed of their rights?You said that wearing dark cloths at night in a ‘high crime area’ would be cause for a street check.  I am sure you will agree being outside after sunset is a completely legal behaviour. Could you please define ‘high crime area’ and given that no crime has been committed why would you not inform the individual about his constitutional rights?The guy beside you – Leo Russomanno – yeah, the guy who just made the impassioned remarks – he raised a bunch of serious concerns.  How do you respond?

Black people are four times likelier to be carded in Ottawa. The police see no issue and the board has no questions http://t.co/08NKMazG5Y

An exchange earlier in the meeting between counsellor Jane Harder and a community group who was seeking more detailed neighbourhood crime stats should have tipped me off that – perhaps – my expectations for todays meeting were a bit high.

Harder prefaced her question to the community group with, “I know the Ottawa police service is doing a lot or really good work your neck of the woods”…. Ugh.

So perhaps it is not a surprise the board did not engage in any critical analysis of the carding report.

And then the board adjourned for the summer break.