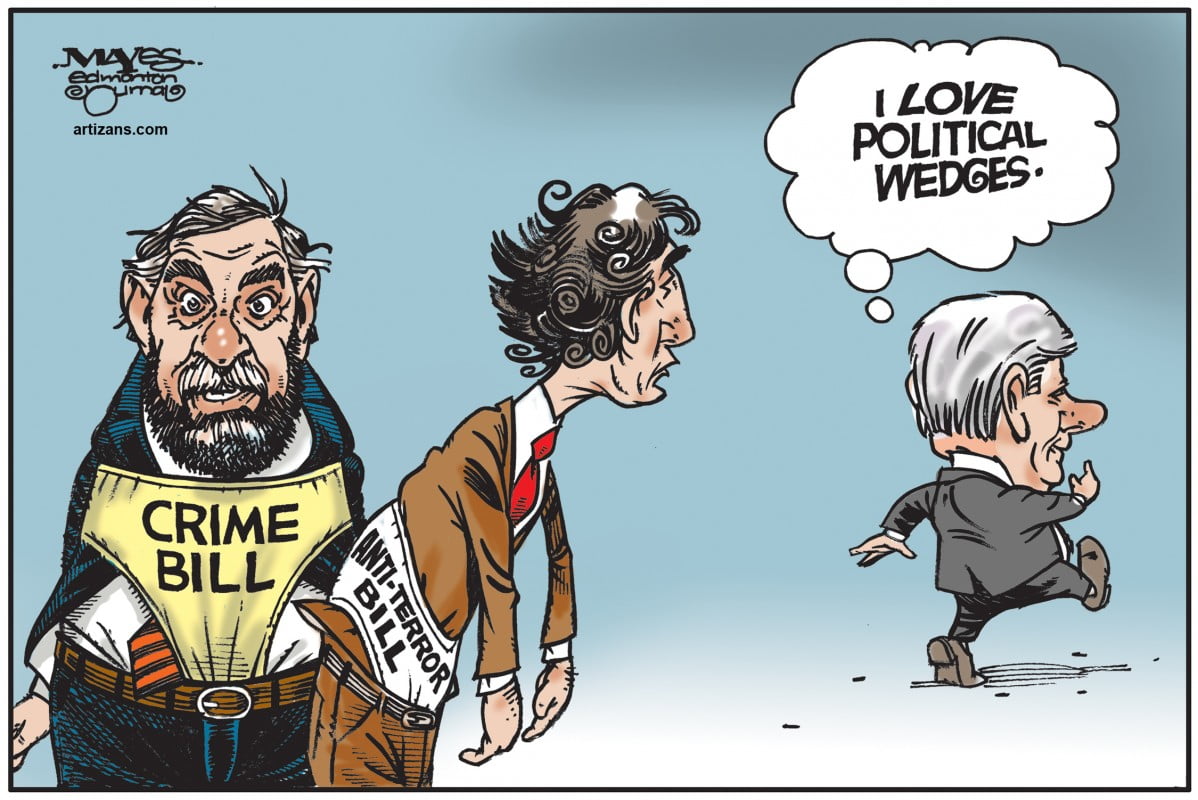 This article first appeared in iPolitics.ca on March 18.  Its well worth a subscription to the site – news delivered right to your inbox – make it so….

Some issues, the Harper government tells us, are so important, so controversial that no legislation can go forward unless it is preceded by extensive consultation and analysis. Unless it can. Follow along — and if you can make sense of this, you have a future in PR.

Last month, the Conservatives killed a Liberal motion that would have fast-tracked the study and debate of physician-assisted suicide. The reason for urgency was plain enough: The Supreme Court of Canada had struck down the legal ban on assisted death and gave Parliament 12 months to fill the legislative void.

Bob Dechert, parliamentary secretary to the minister of Justice, explained why the Conservatives are in no rush:

… given the special circumstances of this issue, which is among the most important that we will ever have to deal with, and in the context of this year, I do not think we should be rushed into doing something that is inappropriate and not take the time to properly and carefully consider it and hear all opinions.

So why is Ottawa taking a go-slow approach to assisted death when, in the case of C-51, the plan appears to be to steamroll the opposition, torque up public anxiety over the vaguest of threats and accuse critics of being closet terrorists? Bet you can guess why.

After twice limiting debate in the House of Commons on C-51, the government pushed for just three days of study at committee, ultimately agreeing to eight days and 48 witnesses.

That’s not enough time even to fake sober analysis. The Conservatives are allowing the Commons just a little over a week to review the most significant changes to Canada’s security and surveillance laws since in over a decade — less time than the average college undergrad might spend picking out a bachelor apartment.

Remember the context. In the immediate aftermath of the 9/11 terror attacks, the Liberal government of the day also introduced sweeping legislation that gave the state unheard-of powers to combat terrorism. The committee that studied the 2001 bill sat for 19 days and heard from 80 witnesses. The government actually listened to the witnesses and, ultimately, agreed to substantial amendments.

The Official Opposition at the time was the Canadian Alliance, precursor to the modern Conservative party. Were they content with 80 witnesses and 19 days of committee study? Here’s what Alliance leader Stockwell Day had to say at the time:

I am disappointed and concerned that the government decided to rush through this complicated, controversial and powerful piece of legislation without debate and input. That was necessary for legislation of this nature.

The Canadian Alliance has consistently called for legislation that would give the government the tools to fight terrorism. However, the government has cut off debate and cut it off in a premature fashion.

This reveals what we have pointed out before: an ongoing contempt for the democratic process …

What wasn’t good enough for Day is just dandy for Prime Minister Harper, who has warned of dire consequences for the safety of every living Canadian if the bill isn’t studied and passed “as quickly as possible”.

Granted, a longer committee process might not be all that useful anyway, given the childish way Conservative caucus members have been behaving to date. Verbally attacking and insulting witnesses. Accusing them of harbouring links to terrorists. One backbencher asked a witness from the B.C. Civil Liberties Association if she was “fundamentally opposed to taking terrorists off the streets”. These are not the sorts of questions you ask if you’re interested in the answers.

And you can get a sense of how seriously the government takes this committee review from a glance at the long list of experts requested by the opposition parties as witnesses, but left off the list by the Conservatives: University of Ottawa law professor and digital privacy expert Michael Geist; Privacy Commissioner Daniel Therrien; Maher Arar; Dennis O’Connor, the commissioner of the inquiry into Arar’s torture; the Canadian Bar Association; former prime ministers; Federal Court Justice Richard Mosley, who found CSIS had lied to obtain warrants; and the Criminal Lawyers’ Association, which I represent.

What do all of these individuals and groups have in common? Two things: They know the law — much better, it seems, than the people who drafted C-51 — and they’ve all been critical of the bill’s effects on privacy and civil rights.

There’s an added benefit to controlling the witness list, of course: You can shove words into the mouths of anyone you don’t invite. Public Safety Minister Steven Blaney assures us that he has “consulted” with Therrien. What he doesn’t say is that this ‘consultation’ amounted to Therrien telling him the bill is a dangerous and misguided spasm of government overreach into the private lives of Canadians — that C-51 will give the government “virtually limitless powers to monitor and … profile ordinary Canadians”.

So what does Stockwell Day have to say about all this? The committee members may never know; although the Liberals wanted to hear from him, Day never received an invitation to testify.

Limit debate, suppress critical views, twist the truth — they’re running down every page in the Conservatives’ pre-election playbook. When NDP Leader Tom Mulcair asked in the Commons why the government was putting the “emphasis on getting the committee to study the bill as quickly as possible, not as thoroughly as possible”, Blaney responded with an ad hominem attack:

Mr. Speaker, Canadians deserve better than an opposition leader who attacks the credibility of those who are there to protect us.

Let us face reality. For 30 years, those men and women at CSIS, working at protecting Canadians, have worked within the law. I invite the member to apologize for pretending that they have broken the law, because that is not the case. This is in the report. They are complying with the law.

Blaney needs to read his own department’s briefing books a little more closely. Maher Arar and Justice Mosley could talk at length about how good CSIS is at working “within the law” — if they were allowed to.

This is all gutter politics, of course. Terror seems to be playing well in an election year. The Conservatives know that the longer the committee studies the bill, the more people come forward to testify to its many and manifest flaws, the harder it will be to present C-51 to the Canadian public as the nation’s sword and shield.

Let people drill down into the details and they’ll worry less about what terrorists might do to them and more about what the government intends to do. The last thing the Conservatives can afford to give us is time.

Debate is not a luxury, or something to be sprinted through in order to get things done. It’s the essence of our system of government; without it, we don’t have a system — just government. Stockwell Day said it in 2001 and it’s still true. Wonder what he’d say today?