The Strange Case of Franck Gervais: Impersonating a Soldier

Last week I turned my mind to the strange case of Franck Gervais – the Quebec man who has never been in the military yet who wore a military uniform to the Ottawa Remembrance Day ceremonies.

I spoke to CBC Ottawa Morning’s Hallie Cotnam about the incident, the public reaction, and the appropriateness of criminal charges.

I also wrote on the issue for iPolitics.ca on November 21st (Its well worth a subscription to the site).  Should the criminal code be the meathod in which society polices morality.  Stephen Harper thinks so.  As pointed out by Donnie McLeod in 2003 Harper said:

The real challenge is therefore not economic, but the social agenda of the modern Left. Its system of moral relativism, moral neutrality and moral equivalency is beginning to dominate its intellectual debate and public-policy objectives.

The Conservative’s clearly believe that use of the criminal code is the best way to avoid “moral neutrality”.  I think the opposite should be true – the Criminal Code should be concerned with harm (which often will intersect with morality).  As a society there are better was to express moral outrage than criminalization.

This is what I wrote for iPolitics:

You wouldn’t use a sledgehammer to kill a fly. Unless, of course, you’re a prosecutor.

The Criminal Code is the sledgehammer. Franck Gervais — the bogus soldier who embarrassed the assembled media covering Remembrance Day observances in Ottawa — is the fly. He’s been charged with a criminal offence. No one seems to be asking why.

It’s an important question, because it turns on a key aspect of the nature of law: how it copes with moral outrage. And moral outrage and righteous indignation dominated the public’s reaction to news that the Ottawa police had arrested and charged Mr. Gervais with impersonating a member of the armed forces.

Let’s set aside the white-hot rhetoric and look at the facts. They’re not in dispute.

Gervais attended the Remembrance Day ceremonies in Ottawa. He was dressed in the uniform of a soldier. He was approached by the media and was interviewed. He made false claims about serving in the military. He spoke respectfully about the importance of the military. He did not seek to advance any inappropriate agenda — wasn’t dunning for donations or attempting to facilitate any other crime.

Gervais’s little cosplay episode evoked strong emotions, and rightly so. The men and women of the Canadian Forces put their lives at risk wearing that uniform. Some have died wearing it. Gervais’ act could be viewed as disrespectful, offensive and objectionable.

It should not, however, be viewed as criminal. The Criminal Code should not be based on vague generalizations about what our society considers to be ethical or moral. It should be based on the principle of harm.

In his essay On Justice, the British economist and philosopher John Stuart Mill argued that moral outrage alone is not a sufficient basis for the exercise of state power interfering with individual sovereignty.

(T)he sole end for which mankind are warranted, individually or collectively, in interfering with the liberty of action of any of their number, is self‑protection … the only purpose for which power can be rightfully exercised over any member of a civilized community, against his will, is to prevent harm to others.

His own good, either physical or moral, is not a sufficient warrant. He cannot rightfully be compelled to do or forbear because it will be better for him to do so, because it will make him happier, because, in the opinions of others, to do so would be wise, or even right. These are good reasons for remonstrating with him, or reasoning with him, or persuading him, or entreating him, but not for compelling him, or visiting him with any evil in case he do otherwise.

To justify that, the conduct from which it is desired to deter him, must be calculated to produce evil to someone else. The only part of the conduct of any one, for which he is amenable to society, is that which concerns others. In the part which merely concerns himself, his independence is, of right, absolute. Over himself, over his own body and mind, the individual is sovereign.

In Canada there is no strict requirement that an act cause harm for it to be criminal. In one important way, however, our law agrees with Mill: Invoking criminal sanctions requires something more than morally offensive conduct.

To illustrate, let’s turn from the harmless (Mr. Gervais) to the truly repugnant: the notorious hate-monger and Holocaust-denier Ernst Zundel.

Zundel, you’ll remember, was charged with the criminal offence of spreading false news for his offensive publications denying the Holocaust — a most odious act.

However, courts don’t make decisions based on public sentiment — they apply our Constitution. The Supreme Court of Canada struck down the law as a violation of the right of free speech. The Charter of Rights protects the right of a minority to express its view — even if those views are unpopular, offensive, appalling or false.

Unfortunately for Mr. Gervais, the law in his case is crystal-clear. It’s an offence to falsely represent yourself as a member of the armed forces. It’s an offence simply to wear a Canadian Forces uniform — or anything that looks like a uniform — without lawful authorization. No exceptions.

From the law’s perspective, it doesn’t matter what was in Mr. Gervais’ mind at the time. Apparently his intended message was one of respect for serving soldiers; the law doesn’t care. Intent is irrelevant. Fly meets sledgehammer.

So that Halloween costume you put together out of an old army uniform? Criminal. The child of a fallen soldier who wears his dad’s uniform as a tribute? He’s a criminal too. 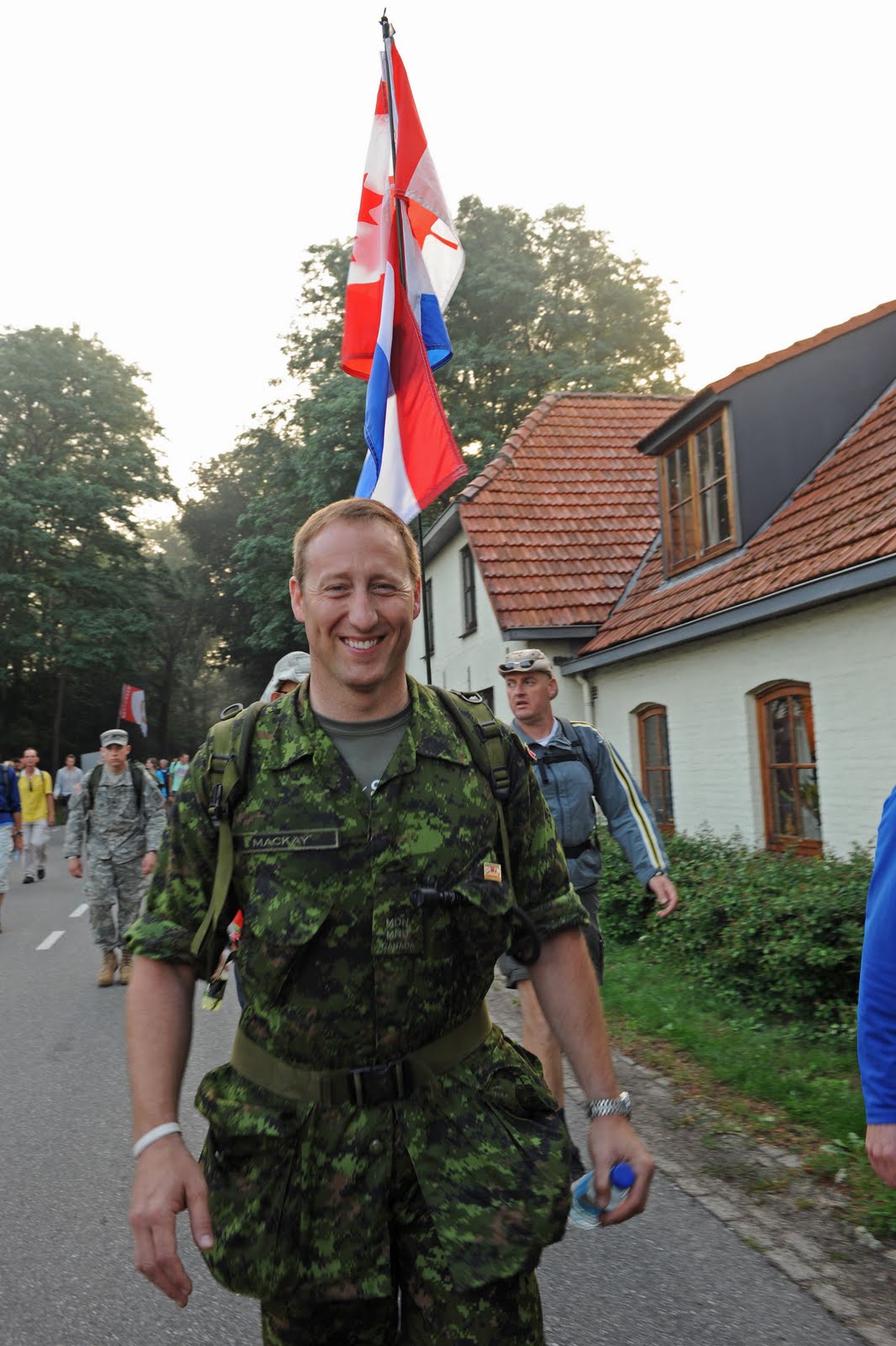 Hell, take a look at this picture of Peter MacKay in military fatigues back in 2010, shaking hands with the real troops in Afghanistan:

Harmless bit of political theatre, right? Correct. It also could be called criminal. You see how weird this can get — how misguided a law can become in its application if it does not take account of intent.

That’s not the only issue at play, of course. As was the case with Zundel, the prohibition of military impersonation may violate the constitutional right to freedom of expression.

There’s no shortage of righteous thinking in the United States when it comes to the military — but even there, constitutional rights prevail over public distaste. The United States Supreme Court has ruled that the Stolen Valor Act — which made it crime to lie about having received a military decoration or citation — violated the right to free speech.

The same could hold true in Canada. Offensive and morally repugnant speech — even when it’s a lie — is protected. That’s the thing about free speech: You can’t take it away from someone just because what he’s saying makes you want to throw up.

There is a cost to using the Criminal Code to enforce morality. Resources devoted to investigating, charging and prosecuting Mr. Gervais could be spent on resources and measures that would help our veterans — the real ones.

The Criminal Code is far too blunt a tool to be used to exact punishment for bruised sensibilities. The strange case of Franck Gervais is a test of our society’s restraint, tolerance and respect for liberty — the very principles our soldiers have fought so bravely to defend.