Fearon: The Supreme Court puts a telescreen in our pocket 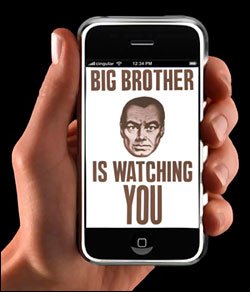 “As technology changes, our law must also evolve so that modern mobile devices do not become the telescreens of George Orwell’s 1984.”  This was the warning delivered in a powerful dissenting judgement issued by three of Canada’s Supreme Court justices in the case of R. v. Fearon.

The majority of the Court (only four judges, thanks to the Conservatives’ botched appointment of Marc Nadon) disagreed.  Instead, in a surprising decision, the Supreme Court endorsed an expansion of the state’s power to put its hands in citizens’ pockets, power up their smartphones and examine their digital fingerprints.

How did we get here? It all began with one fairly typical jewelry store robbery.

Two men, one armed with a handgun, robbed a jeweler as she unloaded her car. The men fled the scene with the loot. Police were called and quickly zeroed in on Kevin Fearon as a prime suspect. Fearon was arrested and searched. The police did not find any jewels or guns — but they did find his phone.

The police also located what they suspected was the getaway car — but they didn’t search it. For that they would have needed a warrant. Fearon’s phone, on the other hand, was fair game. The phone was searched and found evidence — a picture of a gun and a draft text message saying “We did it”.

The Supreme Court can’t be naive about the realities of the digital age. In the 2013 case of R.v. Vu, the Court recognized that cellphones are fundamentally unlike any conventional storage device — say, a briefcase. Cellphones are “fastidious record keepers” which can store immense amounts of highly private information dating back years.

How important is electronic privacy? Most recently, in R. v. Spencer (a case affirming the privacy of Internet information), the Supreme Court held privacy to be “a prerequisite to individual security, self-fulfilment and autonomy, as well as to the maintenance of a thriving democratic society”.

A clear articulation of an important principle — and one that was promptly ignored by the majority judges in R. v. Fearon.

So how did the long arm of the law end up groping through our digital data? Let’s go back to first principles.

For any police search to be lawful, it must be authorized by a reasonable law. Absent a warrant, there is no law that authorizes police to search cellphones — and any search conducted without a warrant presumptively violates the Charter of Rights.

To overcome this obstacle, the police rely on the common law power of ‘search incident to arrest’. This, they argue, provides them legal authority to search cellphones.

‘Common law’ means no judicial oversight. Not only do the police need no judge to sign off on their search, they don’t even need to have reasonable and probable grounds before they search.

In this respect, the ‘search incident to arrest’ is an extraordinary power. Which is why it was supposed to be narrowly defined.

In the foundational case of Cloutier v. Langlois, the Supreme Court summarized the allowable justifications for post-arrest searches:

It seems beyond question that the common law as recognized and developed in Canada holds that the police have a power to search a lawfully arrested person and to seize anything in his or her possession or immediate surroundings to guarantee the safety of the police and the accused, prevent the prisoner’s escape or provide evidence against him.

Cloutier speaks of searching a person to seize evidence — not searching, seizing, and then searching some more. A search of highly private information on a phone is a step too far — no different from using a key found in the pocket of a suspect to snoop through his house.

Post-arrest searches had their origin in the need for police to gain control over evidence; the new Supreme Court decision represents a reckless expansion of that power.

The Fearon case diminishes individual privacy — essential for a thriving democratic society — in favour of investigative expediency. “Prompt follow-up of leads may be necessary,” the majority judges argued. “The search of a cellphone may assist those efforts.”

Which misses the point completely. Obviously, searching phones can serve valid law enforcement objectives. So could warrantless searches of houses, or mass arrests, or oppressive and threatening police questioning.

The real issue is whether police power should be expanded at the expense of individual privacy merely to make the job of law enforcement easier.

The Supreme Court majority said yes — a clear departure from the very recent jurisprudence that argues electronic privacy is too important to be sacrified.

So how does the Supreme Court majority square the privacy inherent in electronic devices with their desire to expand police power? By asking the police to police themselves. The judges suggest that only recent or draft emails can be searched — how many, and how far back, they don’t say. Pictures, Facebook, Twitter, contacts, outgoing calls  … its all up to the cops.

So who polices the police? We’re expected to rely on police — in the heat of an ongoing investigation — to resist the temptation to scroll down too far.

But don’t worry about it. The majority judges have instructed the police to make detailed notes of what they have examined on a phone, and why.

Nothing new there; police have been on notice for decades that they must make complete and accurate notes. But the officers in the Fearon case didn’t bother to do so.

In short, a majority of Supreme Court justices are just trusting enough to give the police power to self-regulate in such searches — even though those same police have shown a blatant disregard for their obligation to take notes.

So let’s sum up: Most Supreme Court justices recognize that cellphones store private and intimate information. They acknowledge the need for special rules for searching cellphones. But those new rules are just a reformulation — even an expansion — of the current rules. And we’re expected to trust the police the police to violate a suspect’s privacy only to the degree necessary, and no further.

Oh — and the police need to take detailed notes … which they’re already required to do … but sometimes don’t.

This is what happens when the highest court in the land limits its defence of the principles of privacy and individual freedom to lip service. Privacy should give way to state intrusion only when absolutely necessary — in, for example, an urgent situation, such as when the police know a gun is on the street and accomplices are on the loose. Those happened to be the very facts in the Fearon case, and it’s the approach taken in the United States (see: Riley v. California, 134 S. Ct. 2473).

But that same Supreme Court majority rejected the suggestion that police should be allowed to search phones only in urgent cases, arguing that to do so would tie investigators’  hands. Investigative expediency trumps privacy. Individual freedom is sacrificed to the needs of the state.

And the state has a telescreen in every pocket.