It does not take any expertise in extradition law to reach this conclusion. After all, you don’t need to be an expert mechanic to reach the conclusion that an abandoned jalopy is a piece of junk. Sometimes it only takes one tragic case to show that the law is an ass.  And unfortunately, the heartbreaking case of Hassan Diab is that case.

In 2008 France requested Diab’s extradition for his alleged involvement in the 1980 bombing of a Paris synagogue. In the early stages of the French investigation information from German and Israeli authorities linked Diab to the bombing. But the case against Diab was circumstantial and the investigation gathered dust for almost 15 years. But, the investigation was re-launched in 1999 after new information came to light. In reality, not that much had really changed. The case against Diab was still circumstantial and weak but French authorities had a new piece of evidence – a positive handwriting comparison analysis between Diab and the bomber.

And that is why in June 2011, after a lengthy and contentious extradition hearing in a Canadian court, Diab was ordered extradited to France.

The judge did not really have much of a choice in the matter. You see, the Extradition Act provides that a judge shall order the committal of the person into custody to await surrender if there is evidence that would justify committal for trial in Canada. And that is a laughably low standard. There just needs to be some evidence. That evidence can be weak, it can be unreliable, it can come nowhere close to quality of evidence needed to sustain a conviction. And unlike criminal trials, the extradition court cannot weigh the evidence. Even the weakest and most dubious piece of evidence must be given full weight by the judge.

Diab never did face trial in France. After 38 months of solitary conferment in a French dungeon, after missing the birth of his daughter, after losing years of his life, Diab was released and all charges were dropped by a French judge.

But Diab should never had been extradited in the first place, the case was just too shaky. But the extradition judge’s ability to prevent an injustice was handcuffed – he did not have the power to throw out a shockingly weak case.

And there was one other unique circumstance in Diab’s case – Canada appears to have been hell bent on extradition. Secret memos obtained last week by the CBC showed that senior Justice Department lawyers helped patch up the French case, misled the court, and suppressed evidence that could have proved Diab’s innocence.

So back to the handwriting analysis that prompted France’s extradition request almost three decades after the bombing. It turned out that the first positive handwriting comparison was based on handwriting samples that were not even Diab’s. The French experts had, in fact, compared the bomber’s handwriting with samples from Diab’s wife. One would be forgiven for thinking the positive match was a pretty much a forgone conclusion. The Canadian court had little time for this type of sloppy investigation and it looked like the extradition request would be denied. But then Canada’s lawyers stepped in. They were set on helping France and throwing their own citizen under the bus.

The secret memos show that Canada told France they needed to find a smoking gun. Canada told France to conduct a new handwriting analysis, this time with accurate writing samples. They also suggested Diab’s fingerprints should be compared with the bomber’s.

And then Canada helped France by adjourning the extradition hearing, again and again, to the give France time to fix their case. The extradition judge asked Canada’s lawyer Claude LeFrançois why France needed the adjournment. The CBC reports that court transcripts showed that LeFrançois told they court that he has no knowledge of what France was doing. Except he did. France was acting under his direction.

LeFrançois seems to have lied to the court, a cardinal sin, but one that gave French authorities the time they need to generate a second handwriting report. This report was not much better than the first. The court ruled that the handwriting analysis was based on questionable methods and on an analysis that seemed “very problematic” and was “susceptible to a great deal of criticism and attack.”

But in extradition hearings the court cannot discount dubious evidence and so, based on the problematic handwriting analysis Diab was committed to custody to await surrender to France.

But there was one fact that was hidden from both the court and Diab – the fingerprint analysis, suggested by Canada, were not a match to Diab. This could have been powerful evidence of innocence. But the report was buried by Canada’s lawyers and was never submitted to the court or even disclosed to Diab’s defense team.

Maybe the result would have been different if the fingerprint analysis had been disclosed. After all, as any honourable Crown prosecutor is well aware, the nondisclosure of exculpatory evidence has been identified as a hallmark of so many wrongful conviction cases. If the fingerprint analysis had not been kept secret perhaps the court would not have ordered Diab’s extradition or maybe the Justice Minister would not have been so quick to turn his back on a Canadian citizen. 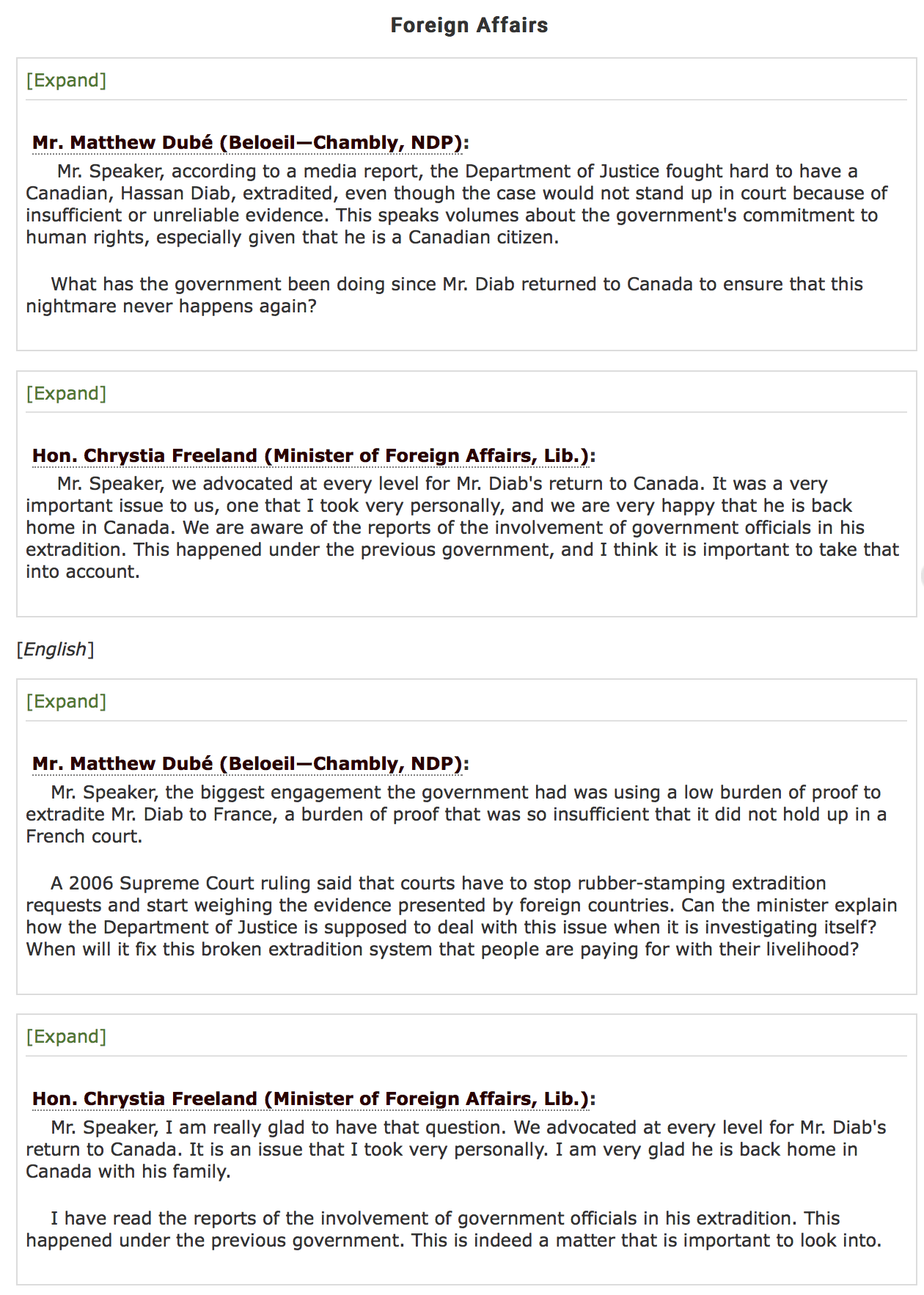 Diab’s case was a completely preventable tragedy. But, there may be some good to come out of the tragedy. Chrystia Freeland, Canada’s Minister of Foreign Affairs, told the House of Commons that she was aware of the role government officials played in Diab’s extradition and that it was important that the matter be looked into.

Frankly, “looking into the matter” is the bare minimum. Canada must reevaluate the entire extradition framework. Courts should be given more latitude to refuse extradition in weak cases. And Canadian officials must be held to account for suppressing evidence and colluding with foreign governments. The actions and representations of Mr. LeFrançois should be closely scrutinized and if he or others were involved in suppressing exculpatory evidence or misleading Canadian courts there should be swift action.

And you can get ready to add Hassan Diab’s name to the growing list of Canadians who will be compensated for Canada’s role in perpetuating a miscarriage of justice.

There can be no repairing of the harm that Canada inflicted on Diab but we can begin to repair our broken extradition system.