A picture may be worth a thousand words, but the fairness when it comes to the justice system is priceless. 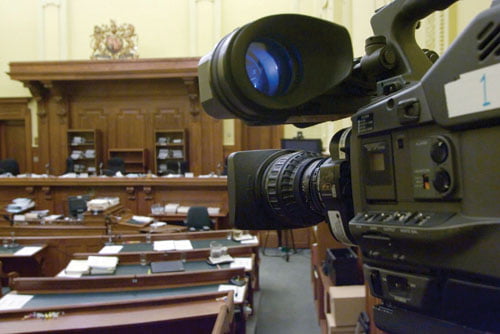 Some would have you believe that trials in Canada are secret affairs that take place behind locked doors in deserted courtrooms and that the Star Chamber is alive and well in Canada. They would have you think that evidence is concealed from the public, and judges are black boxes — their decisions inaccessible and undecipherable to the larger community, and only the bright light of television cameras and public broadcasts will cure these ills.

Despite the fact that no part of that straw man is true, the thorny issue of cameras in the Canadian trial courts has — as it does every time there is a sensational case — become an issue again.Last week, an Alberta court allowed news cameras to broadcast its decision in the high-profile case of Travis Vader. It is not difficult to divine the reasons behind the media’s application to broadcast the Vader decision. The case was scandalous and shocking — a double first-degree murder of a 70-year-old couple, with no motive, no bodies, no murder weapon and a complex police investigation involving an undercover sting. It is basically the plot of every episode of Law and Order.The Vader decision was exceptional and dangerous.Outside the Supreme Court of Canada, cameras have been very rarely allowed into our courts. In fact, in Ontario, the Court of Justices Act prohibits photographs and video recording of court hearings or people entering or leaving the courtroom — a prohibition upheld by the Ontario Court of Appeal. But there is always the risk that exceptions become rules.Those in favour of Canadian court TV make a seductive argument. Our courts are already open to any member of the public, they say. Video broadcasts are only a modern manifestation of this open courts principle. The justice system needs to catch up to society. After all, journalists not only report on proceedings but more and more frequently live tweet the evidence. Video broadcasts will serve to educate the public, demystify our justice system and ensure accountability. They broadcast trials in the United States — so why not here?These arguments, however, don’t really hold up to scrutiny and ignore the practical difficulties posed by broadcasts.Let’s start with the basics: A trial’s primary focus is truth-seeking and fairness, not entertainment.The broadcastcasting of court proceedings would increase the likelihood of contamination of the evidence. Witnesses are excluded from court until they give their evidence to avoid the possibility that their testimony may be influenced by what came before. It is true an unscrupulous witness can read news reports about trials — but under the current system they can’t watch the whole proceeding.Speaking of contamination, broadcasts could pollute or be perceived to pollute the trier of fact — say, a juror — with otherwise inadmissible evidence. Yes, cameras can be turned off and broadcasts edited. But mistakes will be made and the fairness of trials will be jeopardized.Cameras will also adversely impact witnesses. The proverbial bright lights of the camera may heighten anxiety and increase the reluctance of witnesses to testify at all. Imagine the poor Good Samaritan who has relevant evidence to give in a high-profile gang trial, or the sexual assault victim forced to relive indignities before the flashing red recording light. Testifying can already be a harrowing experience. Cameras may feed the public’s appetite for immediate informational gratification — but the quality of that information will suffer.But what about education? The public will have a better understanding of our justice system — so it’s all worth it, right? Call me a cynic but my bet is that only the most high-profile, most outlandish, most sordid cases will ever be broadcast. So the public may be better entertained, but they won’t be better educated. In fact, cameras may actually diminish public confidence in the justice system and play into the dangerous political narrative that we live in unstable and dangerous times.The list of negatives goes on. Scarce judicial resources will be taken up with the monitoring of media compliance with broadcast rules, lawyers may grandstand or play to the camera, counsel may be more tempted to litigate their cases through the media and solicitor-client privilege could be violated as it was in the O.J. Simpson trial. And I pity the poor, innocent accused who is acquitted only to find himself a YouTube star. There are better ways to educate the public and open up our courts than to give media corporations free content for their broadcasts. The government could educate the public about our justice system instead of using it as a political wedge, the public could be encouraged to attend court, funding could be made available for courtroom-specific education initiatives and journalists could be given better access to dockets, exhibits and transcripts.Before Pandora’s box is opened these issues should be given careful and exacting consideration.At the end of the day, our courtrooms should be focused on the truth and justice of each individual case and not turned into the set of the next Making a Murderer —because we all know how well that one turned out.A picture may be worth a thousand words, but the fairness when it comes to the justice system is priceless.