Who is the best fictional lawyer of all-time? 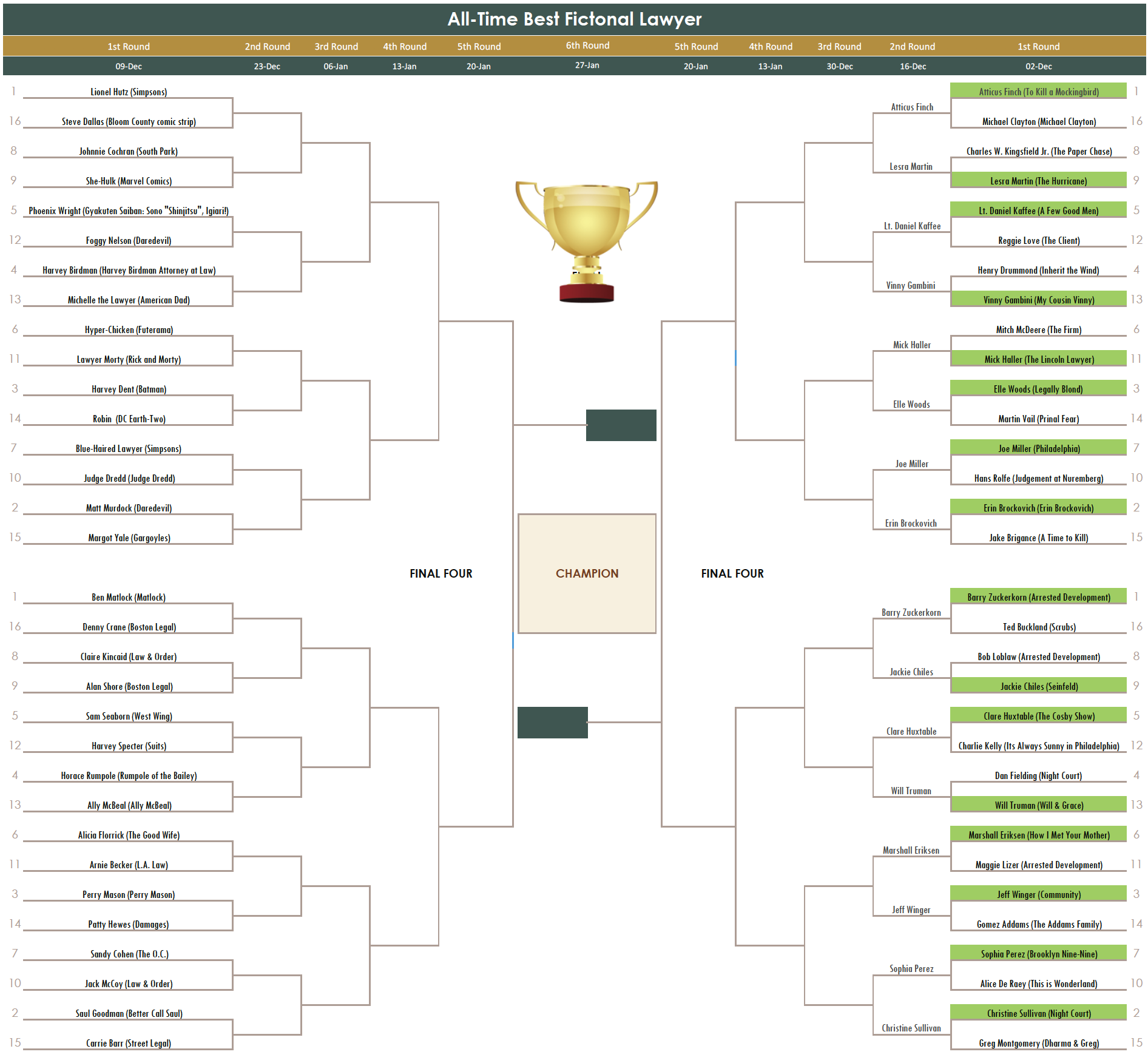 It is a question that ­has divided law offices, torn law-school friendships apart and driven legal nerds to the brink of madness.

Who is the best fictional lawyer of all-time?

Until recently this has been a question reserved for philosophers. But now, we have the technology to answer the age-old question in the most democratic way possible – an NCAA-style bracket tournament.

And so, at the end of November, the top legal minds at my firm, Abergel Goldstein & Partners, spend days compiling an exhaustive list of the top fictional lawyers. And now we make them battle in a head-to-head competition.

Using a secret scientific method, we have chosen and ranked 64 fictional lawyers from movies, hour-long dramas, cartoons, and sitcoms. Each week, a popular vote will determine which lawyers move on to the next round and which lawyers are thrown out of court.

What qualities does the best fictional lawyer possess? Maybe they display realistic courtroom skills. Perhaps they have the chops to carry the TV show or movie. Maybe they are charismatic and charming. But there really is no 3-part functional and objective test to be employed here. It is all up to the will of the people.

The Simpson’s Lionel Hutz is seeded first in the Cartoon bracket. His courtroom tactical skills are undeniable, “Don’t worry, Homer. I have a fool-proof strategy to get you out of here: surprise witnesses, each more surprising than the last. I tell you, the judge won’t know what hit him!”

Ben Matlock claimed the top seed in the hour-long drama category. Matlock, the renowned, folksy yet cantankerous defense attorney is worth every penny of his $100,000 retainer fee and should be a role model for any criminal defense lawyer.

Atticus Finch fought a system of institutionalized racism in the 1962 film adaptation of To Kill a Mockingbird. Although Finch is the number-one seed in the movie category he may carry come baggage following the publication of Go Set a Watchman in 2015.

Barry Zuckerkorn, the Bluth family’s lawyer, took the top seed in the sitcom category. Because you can’t try a husband and wife for the same crime, right?

However, the full list of fictional lawyers and their rankings were not without some controversy.

Some pedantic critics decried the inclusion of lawyers like cartoon Johnnie Cochran and Lesra Martin from the movie The Hurricane because they are real people and not fictional lawyers. Technically correct, but this tournament only considers the fictional representation of these lawyers not their real-life catalogue of work.

Some critics were quick to point out that Erin Brockovich was only a law-clerk and not a full-fledged member of the bar. Yes, again technically true, but Brockovich did take down Pacific Gas and Electric Company and kick some legal butt. She is a worthy contestant.

There were some from the chattering class who disputed our rankings. Why is Denny Crane from Boston Legal seeded 16th, they whined?

And some of the olds wanted more L.A. Law lawyers included on the list.

All of these concerns are interesting but ultimately misplaced. The tournament list is perfect – it is all of the critics who are wrong.

Every real-life lawyer has their favorite fake lawyer. Some of us were inspired to become lawyer because a television or movie character. We all name-drop fictional lawyers in our closing argument. And we all strive for the real-life Matlock moment where the case is won with one well timed question.

But this is a battle that will not be won or lost in the courtroom.

It is time to choose your champion and head over to the AGP website and vote in the tournament.

There is a new round of voting each week. Only the victorious lawyers will advance with the ultimate champion crowned on February 3, 2019.