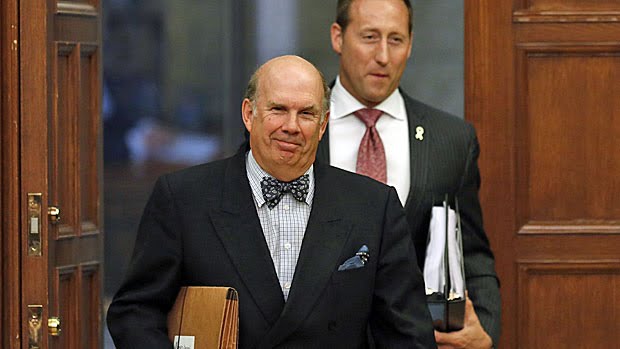 In a January iPolitics article I commented that 2014 did not look any better – it looks like I was right.

The last few weeks have proven this to be true.  The Supreme Court declared sections of bill C-59 that retroactively removed early parole unconstitutional (more to say on this later this week).

A Federal Court judge in Vancouver granted an injunction against new laws that would prohibit medical marijuana users the ability to grow their own plants.

A plain reading of the Supreme Court Act should have been enough to anticipate that there were issues with Nadon’s selection.  Section 5 and 6 of the Act read:

Who may be appointed judges

5. Any person may be appointed a judge who is or has been a judge of a superior court of a province or a barrister or advocate of at least ten years standing at the bar of a province.

The issue before the Supreme Court was: does Nadon – a Federal Court Judge – qualify under section 5 and if he does can he be considered as being from Quebec under section 6?

The obvious issue is that the Federal Court is not mentioned in section 5 and Nadon does not seem to fit the Quebec criteria under section 6.  The plain reading of the sections seems to suggest that Nadon may not qualify to sit on the Court.

To their credit the Conservatives did what they never do – consult an expert.  Former Supreme Court Justice Ian Binnie was hired to give his opinion.

Binnie came to the opinion that section 5 included Federal Court judges.  He interpreted that the past tense phrase ‘has been’ should apply to ‘having been a barrister for at least 10 years’.  Nadon had been a lawyer for over 10 years prior to being appointed to the Federal Court thus – according to Binnie – Nadon passed the section 5 test.

Binnie also came to the opinion that section 6 – despite the plain wording otherwise – applied to anyone who had ever been lawyer in Quebec.  Nadon had once been a lawyer in Quebec thus he qualified under section 6.

Binnie’s section 5 opinion is very thorough and in retrospect – according to the Supreme Court – sound (Justice Rothstein can breath easy) .

As noted by Michael Plaxton and Carissima Mathen in their excellent paper: Purposive Interpretation, Quebec, and the Supreme Court Act:

Binnie focuses on section 5 far more than on sec- tion 6. Section 6, though, is a very different provision. It is of course true that we must read section 6 in light of section 5, but we must also pay attention to its plain language. The section on its face imposes a restriction over and above that imposed by section 5: three judges must be from Quebec. In addition, it suggests that appointees who do not sit on one of the eligible courts must be a current member of the Quebec bar. In interpreting the section 6 requirement that nominees be drawn from the Court of Appeal or Superior Court of Quebec, or from “among its advocates”, it seems strange, if one is to adopt a purposive reading of the section, not to ask why the Quebec requirement was imposed in the first place. Yet Binnie does not ask that question. He reads sec- tion 6 as though all it does is reproduce section 5, swapping “of a province” with “of Quebec.”

There was good reason for the Government to proceed with caution from the outset.  The Conservatives, however, did the opposite.

Consultation seems to have been limited to those that with concurring opinions.  The Nadon nomination was first announced on September 30, 2013 and on October 3, 2013 – after a farcical committee hearing the day prior –  Nadon had been appointed to the Court.

The Conservatives then acted to amend the Supreme Court Act to accord with their interpretation of section 5 and 6.  Appallingly, this amendment was buried in the middle of a budget implementation bill – a tactical manoeuvre which limited debate and played fast and loose with constitutional principles.

The Supreme Court took a dim view of the Conservatives attempt to fiddle with constitutional guarantees and found their ‘budget implementation’ amendments ultra vires and in conflict with section 42(1)(d) of the Constitution Act.

The Court focused on the legal issues.  Statutory interpretation is somewhat qualitative and as with any exercise in interpretation there can be legitimate disagreement.  Justice Moldaver wrote a dissenting opinion that is well worth a read.

In my view the Court’s section 6 analysis – that a Federal Court Judge did not meet the section 6 Quebec condition – is correct.  As the Court says:

First, the plain meaning of s. 6 has remained consistent since the original version of that provision was enacted in 1875, and it has always excluded former advocates. Second, this interpretation gives effect to important differences in the wording of ss. 5 and 6. Third, this interpretation of s. 6 advances its dual purpose of ensuring that the Court has civil law expertise and that Quebec’s legal traditions and social values are represented on the Court and that Quebec’s confidence in the Court be maintained. Finally, this interpretation is consistent with the broader scheme of the Supreme Court Act for the appointment of ad hoc judges.

A transparent and intellectually honest government could have avoided this debacle.  By acting precipitously the Conservative have again reaped what they sowed.

As I said  – there can be disagreement.  Tomorrow I will ‘Gild the Lilley’ and  jump down the rabbit hole to unpack Brian Lilley’s latest video rant on the Nadon decision.  In this stunning piece Lilley is at his best – confusing Justice Louise Arbour for Justice Louise Charron, abandoning nuance and dispensing with intellectual rigour – fun times.