Canadians were told that reforming the justice system was a priority for Jody Wilson-Raybould and the Trudeau government.We were told evidence-based policy is the new order of business when it comes to crime and punishment. Both Trudeau and Wilson-Raybould identified the use of mandatory minimum sentences and constraints on judicial discretion as priority areas for reform. 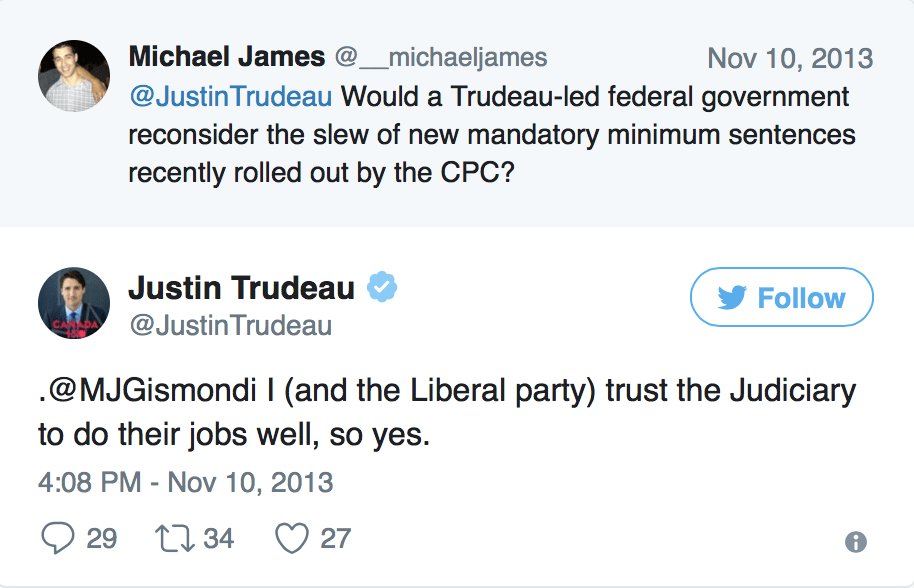 And then there was no action. But last year at the Criminal Lawyers’ Associations annual conference, Wilson-Raybould was crystal clear in saying that restoring judicial discretion was an issue of upmost importance — she told the crowd that justice couldn’t be a one-size-fits-all proposition. Specifically, she said that mandatory minimum sentences were a priority for change and promised that reforms were coming.And then, again, there was no action on minimum sentences. Heck, Wilson-Raybold even introduced legislation to repeal laws that the Supreme Court of Canada has ruled are unconstitutional — except for the minimum sentences.So what can possibly explain the government’s lack of action on minimum sentences?Well, it seems that the government’s resolve on evidence-based decision-making and progressive justice policy may begin and end with public opinion.Last week Jessica Prince, senior policy advisor to the minister of Justice, tweeted a link out to an EKOS survey commissioned by the Department of Justice. The survey seeks the public’s feedback on the use and effectiveness of mandatory minimum sentences. Forget the EKOS questions. The question we should be asking is why?

Let’s be frank. The public’s opinion on minimum sentences is irrelevant if the goal is genuinely to enact policy based on evidence. Just like the public’s opinion on whether global warming is real is irrelevant. Facts are facts and Wilson-Raybould’s survey is purely an exercise in delay and political cover.Setting criminal justice policy based on the compass of public opinion is a dangerous game that risks undermining fairness and the rule of law. Interpreting constitutional rights on the whims of the majority fundamentally misunderstands one of the purposes of Canada’s Charter of Rights and Freedoms: to protect the weak from the powerful and minorities from the whims of the majority.But let’s take a step back and review minimum sentences so we can fully understand Wilson-Raybould’s lack of principled leadership.Minimum sentences remove the usual judicial discretion to impose a sentence that takes into account the particular circumstances of the offender and of the offence. The result in many cases — grossly disproportionate sentences that are “so excessive as to outrage standards of decency” and are “abhorrent or intolerable” to society. Those are the Supreme Court’s words.Mandatory minimum sentences also result in the insidious transfer of discretion from judges to the Crown prosecutors — who have the discretion to drop a minimum sentence in exchange for a plea to a lesser charge. This sort of deal, dangled before an incarcerated accused, can result in a perverse inducement for the innocent to plead guilty. The costs of minimum sentences — both financial and social — come with little benefit. Evidence shows that minimum sentences don’t deter crime, reduce recidivism rates or make our communities any safer. These are not matters up for debate. These are facts confirmed by decades of research. These are facts outlined in hours of evidence presented at parliamentary committee hearings. In 2007, one of Canada’s most respected criminologists, Anthony Doob, testified before the House Justice committee and summed up the state of affairs, saying, “The evidence of [mandatory sentences’] ineffectiveness is clear. Numerous studies have been carried out in various countries demonstrating that mandatory minimum penalties of this kind do not deter crime.”And Wilson-Raybould knows this. In 2016, the Department of Justice commissioned a meta-study of the evidence on the impacts of minimum sentences.The government’s own review found that “harsh penalties — like MMPs — are ineffective at deterring crime” and detailed that “experienced practitioners and social science researchers have long agreed, for practical and policy reasons [. . .], that mandatory penalties are a bad idea.”The 2016 report went on to find that most of the recent academic discussions found that increased reliance on minimum sentences as evidence have “come not from an empirically or evidence-based need for more punitive policy, but from political maneuvering.” The 2016 review found that when minimum sentences are evaluated in terms of their stated substantive objectives, they do not work. But even in 2016 this information was not a revelation. In 2007, the Library of Parliament clearly set out the potential constitutional difficulties, the lack of utility and the negative impacts of mandatory minimum sentences. The Library of Parliament even quoted a Canadian meta-analysis that found there was “little difference in general recidivism rates, regardless of length of incarceration or whether the offender was given a prison or community sanction. In fact, prison produced slight increases in recidivism.”But this should come as no surprise for those truly motivated by evidence-based policy. After all, a 2005 Justice Department Report found, after a review of the evidence, that “minimum sentences are not an effective sentencing tool: that is, they constrain judicial discretion without offering any increased crime prevention benefits.”So why is the Department of Justice now conducting a public opinion poll that includes questions asking for the subjective opinions on the empirical question of whether mandatory minimum sentences deter crime? 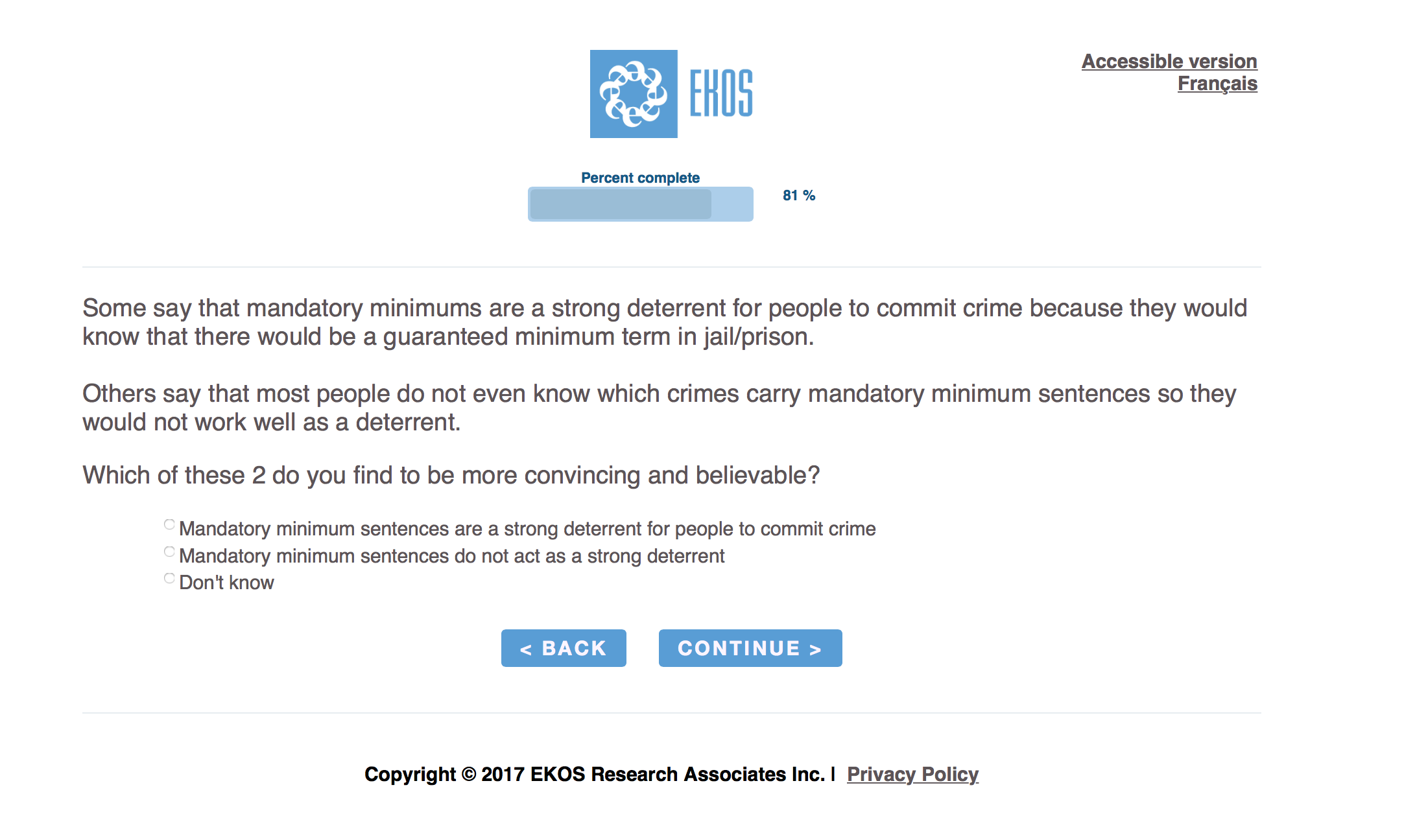 The evidence on the lack of effectiveness and costs of minimum sentence is clear. In 2016, Wilson-Raybould said that minimum sentences were a priority. After almost a year of inaction, that priority is manifest in a concern about public opinion? But perhaps this should not be a surprise given that in 2016 The Canadian Press reported that the Liberals were eyeing a “politically viable strategy” to bring changes to minimum sentences.After a decade of ideological criminal justice policy at the hands of the Harper government, swift and principled action is imperative. Inaction means unjust court results, less safe streets, increased court delays and ballooning costs.Minimum sentences represent the lowest-hanging fruit for meaningful justice reform. Their counterproductive and negative impacts are well documented. This is not a matter for debate. The solutions are known and uncomplicated.All we need now is a justice minister with the principle and conviction to take action. Unfortunately, it seems that piece is still missing.