Conservatives are up to their old disingenuous tricks

This month Manitoba’s Criminal Review Board granted Will Baker an absolute discharge – and then the theatrical outrage hit the political fan, because Baker is better known as Vince Li, the man responsible for a gruesome and widely publicised 2008 killing on a Greyhound bus.But Baker was not really responsible. Baker suffers from schizophrenia. At his trial both the Crown and defence counsel agreed that his actions were driven by mental illness and that he should not be found guilty of the gruesome murder.You see, in Canada we exact punishment, vengeance and retribution against those who commit serious violent offences. But we do not punish people who don’t know right from wrong and because of mental illness cannot appreciate the nature and consequences of their actions. In Canada, people who have illnesses like Baker receive treatment and live under restrictions until they no longer pose a risk to the public.Baker did not get off scot-free. For years following the finding of not criminally responsible, Baker was confined to a secure mental health centre and received intense treatment. Each year a group of judges, physiologists, doctors, experts and members of the public reviewed his case. Gradually Baker was given more and more liberty – first escorted visits to the community, then day passes and eventually the right to live on his own.Baker passed each test – he took his medication, followed the conditions and ultimately the review board of community members, experts, doctors and lawyers found that he no longer posed a threat to the community. It was only after nine years of intense and successful treatment that Baker was granted an absolute discharge. Canada’s progressive Review Board system has been incredibly successful. The rate of recidivism for NCR individuals is much lower than for offenders who are sentenced to traditional jail. In fact, less than one per cent of NCR individuals go on to commit a serious violent crime once back in the community.But facts have never got in the way of fake Conservative outrage. Mere days after Baker’s discharge Conservative Party interim leader Rona Ambrose rose in the House of Commons to politicize the issue:

“Mr. Speaker, the issue is bigger than that. We know the Prime Minister voted against our legislation, which was triggered by Tim McLean’s death, that would make sure people like Vince Li [Will Baker] would not be allowed out.When the minister and the Prime Minister look at reforming the justice system, it is not about the rights of criminals that we are concerned about on this side of the House. We think if people do this, they lose a lot of their rights.”

Ambrose did not mention that Baker had been suffering from untreated schizophrenia at the time of the offence. She failed to mention that the Crown agreed Baker should be found not criminally responsible. She did not reference the robust review board process where an individual is only discharged after a panel of experts is satisfied that public safety would not be jeopardized. Sometimes facts can get in the way of politics.Not once did she mention mental illness – which is ironic given that a few short weeks before Ambrose’s misleading remarks in the House of Commons she tweeted:

“Every time we talk about mental health we get stronger and make those around us stronger too. Together we can #EndTheStigma #BellLetsTalk.”

Every time we talk about mental health we get stronger and make those around us stronger too. Together we can #EndTheStigma. #BellLetsTalk pic.twitter.com/Nj7mGYcrcm

Apparently Ambrose only pays lip service to mental health when it is politically convenient.Ambrose’s self-serving commentary on Baker’s case was also simply untrue. The Conservatives’ Not Criminally Responsible Reform Act, which was passed in 2014, did not, as Ambrose claimed, “make sure people like Vince Li would not be allowed out.” In fact, the Conservative bill mandates that someone like Baker should be released if a court is “satisfied that there is not a substantial likelihood that the accused will use violence that could endanger the life or safety of another person.” This is the same test Baker passed before the review board.In other words Ambrose did not only do the opposite of #EndTheStigma but she also misled the House of Commons.  But there is always lower in the muck one can sink. Last week Conservative Justice Critic Rob Nicolson sent out a fundraising email that tried to connect the dots between Baker’s absolute discharge for the “brutal murder” and the need to donate to the Conservative Party. 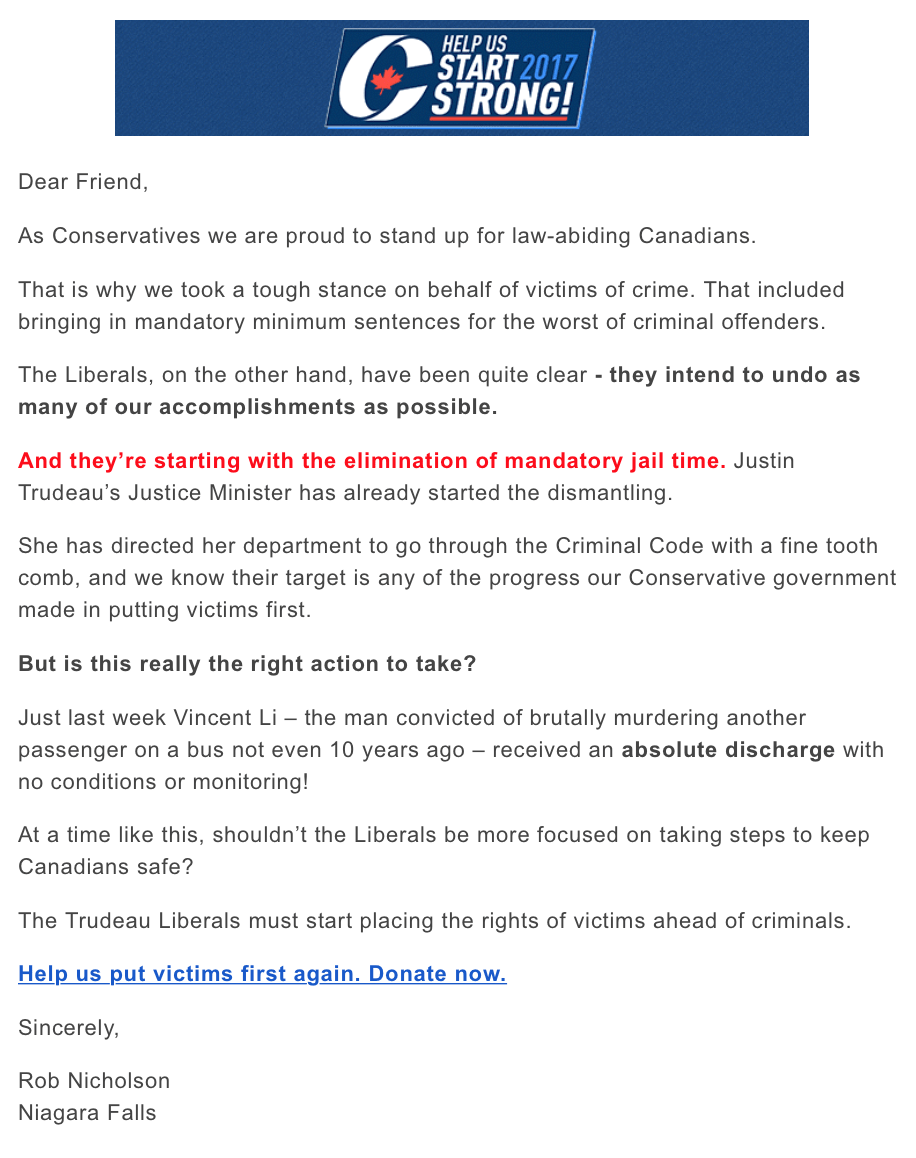 Again, Nicolson made no mention of mental illness, the robust protections afforded to society by the review board, or the fact that the Crown agreed to the NCR finding. At the end of the day fear-based politicking may win some votes and raise some money but there is a cost – an erosion of public trust in our institutions and a dimming of the vibrancy of our democracy. Perhaps it is time that everyone who tweeted on #BellLetsTalk day stood up to Ambrose and Nicolson to really #EndTheStigma.